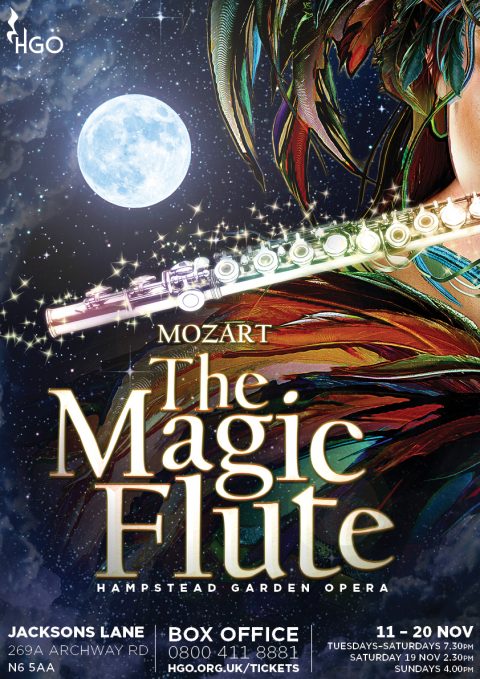 Click image to download the flipbook programme, which can also be printed. If you choose to download, please make a donation to help support HGO. Thank you.

Premiered three months before the composer’s death, in his final opera Mozart brings to life the quest of Prince Tamino, and the bird-catcher Papageno, to rescue the Princess Pamina. Caught up in a struggle between her mother, the volatile Queen of the Night and the powerful High Priest, Sarastro, the adventure leads them to wisdom as well as love. The Magic Flute is an ideal demonstration of Mozart’s unsurpassed ability to blend layers that are seemingly contradictory into a profound whole. In this Singspiel, Mozart combines both spoken dialogue and sung drama to tell a story that, moving backwards and forward from popular and learned musical styles, ends up hovering between the sublime and the comic.

Toria Banks, the director of ‘The Magic Flute’ observes: “It’s an opera about Enlightenment, but it can be pretty baffling. I’ve loved spending as much time as possible with the score and the libretto, finding my way to the heart of it.

It’s easy to see it as staggeringly sexist, and therefore really not very enlightened at all.  In it, a man presides over a Temple of Wisdom, and the thing he seems to care most about is stopping women from getting inside. He also kidnaps a young woman and exposes her to repeated attempted sexual assault. If we are asked to see Sarastro as the great wise leader it is a real problem. I’m also not keen on saying, ‘it doesn’t matter, it’s just a story’, because that really diminishes an amazing piece of art. The answer is Mozart’s extraordinary heroine, Pamina, who is much wiser than her captor. It’s Pamina who decides to take the trials together with Tamino. She refuses to be the prize in a test of manliness, and insists on participating in life as an equal. Then she enters the Temple of Wisdom and throws open the doors for good.

It’s a comedy, and in Mozart’s work that doesn’t just mean that it’s funny, or that it has a happy ending, but that it expresses a generous, optimistic vision of humanity. It’s been a tonic in political hard times, to be honest. The story starts with the arrival, out of nowhere, of a hero from another realm, in our production he’s a sort of Saint George, who faints fighting the dragon. He wakes up in a sort of England, sort of now, where power and learning are kept for the few. In the end though, it’s not heroism, but grace and love which throw open the doors of the Temple to everyone. For me, it’s not about imposing a concept, but rather how the story resonates with us as a company, in a way I hope we can share with our audience. It’s uplifting to work on, particularly with brilliant collaborators, like Chris and Emma [Bailey, Linbury Prize winning designer], and a cast full of youth and energy.”

A theatre director for over a decade, since moving into professional opera Toria has been staff director for ETO (where she met then staff conductor, Chris Stark), and Revival Director for the acclaimed ROH production of Cavalli’s ‘L’Ormindo’ at the Sam Wanamaker Playhouse, at Shakespeare’s Globe. She has also directed new operas at the Grimeborn and Tête à Tête festivals. She taught acting at Arts Educational Schools for five years, and has been working with singers as Resident Director at Trinity Laban since 2009. This is the first time she’s worked with HGO.

Christopher Stark is the Conductor and co-Artistic Director of the RPS Award Winning Multi-Story Orchestra, based in a Peckham Car Park, with whom he made his debut at the BBC Proms in September. The Orchestra has appeared at the Aldeburgh and Brighton Festivals along with a yearly orchestral programme in Peckham. He has worked as Assistant Conductor for the BBC Proms, Glyndebourne Festival and Glyndebourne on Tour who awarded him the Lefever Award in 2014 for work on The Turn of the Screw, and for English Touring Opera. He studied at Trinity College, Cambridge.

The Queen of the Night