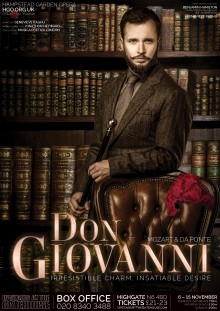 A new production of Mozart’s Don Giovanni in an exciting new concept set in modern-day Oxford University, developed by Genevieve Raghu, with a new English translation by Benjamin Hamilton.   The Music Director will be Jonathon Heyward, who has just won the highly prestigious Besançon International Competition for Young Conductors.  This will be Hampstead Garden Opera’s 30th and final opera performed at Upstairs at the Gatehouse, before moving to their new home at Jacksons Lane next year.

Director Genevieve Raghu introduces the production; “Don Giovanni still has astonishing relevance today. We live in a time where our needs and wants can be met instantly; we need only to swipe left or right on our phones to organise the next intimate encounter. In our modernised production, dating websites and social media put thousands of women at serial womaniser Don Giovanni’s fingertips.”

“Don Giovanni is highly respected, highly charismatic and incredibly charming. In our production, he’s a ‘Don’ at Oxford University, and cloaks himself in all the respectability that it affords him: an effective disguise for the seedier side of his life.” The themes of honour and reputation that weigh heavily in the opera may carry less punch in our progressive modern times, but within the private clubs of Oxford University their influence is still to be found, powerfully concentrated. It’s an ancient institution within a modern world, where name and prestige still carry huge social weight, and that’s why we thought it a perfect setting for our production”.

“In addition to this, Oxford boasts an association with the crime drama inspired by Colin Dexter’s Inspector Morse franchise.  Fans of the genre will already be familiar with the atmosphere of upper-class intrigue and champagne-soaked criminality that Dexter created, and our Don Giovanni fits perfectly into his world. We will reinvent Don Giovanni for a new generation, in recognisable surroundings but with complete fidelity to the core values of the legend.”

“You have to love this Don!”

David Winskill for the Ham and High

Edmund Gordon for The Buzz